The Tuskegee Airmen were the first African-American military aviators in the US Armed Forces. These brave men made up the 332nd Fighter Group. The Tuskegee Airmen initially were equipped with Curtiss P-40 Warhawks fighter-bomber aircraft, briefly with Bell P-39 Airacobras (March 1944), later with Republic P-47 Thunderbolts (June - July 1944), and finally with the aircraft with which they became most commonly associated, the North American P-51 Mustang (July 1944). Individual pilots of the 33nd FG earned approximately 1000 awards and decorations.

Replicating "Duchess Arlene," the P-51D Mustang flown by Lt. Robert Williams – who flew 50 combat missions from Italy during World War II and later wrote the original manuscript for the award-winning 1995 film, The Tuskegee Airmen – of the 100th Fighter Squadron, 332nd Fighter Group in 1944-45.

Designed to meet an RAF requirement for fighter-bomber and reconnaissance aircraft, the P-51 Mustang was first flown on October 26th, 1940. This versatile aircraft was capable of escorting bombers on long-range missions, engaging in dogfights, and dropping down to destroy German targets on the ground. At least eight versions of the P-51 were produced, but it was the definitive P-51D that gave the Mustang its classic warbird appearance. Britain and the US both tested the airframe with the Rolls-Royce Merlin engine, which gave the aircraft tremendous performance gains. The Truman Senate War Investigating Committee called the Mustang "the most aerodynamically perfect pursuit plane in existence." 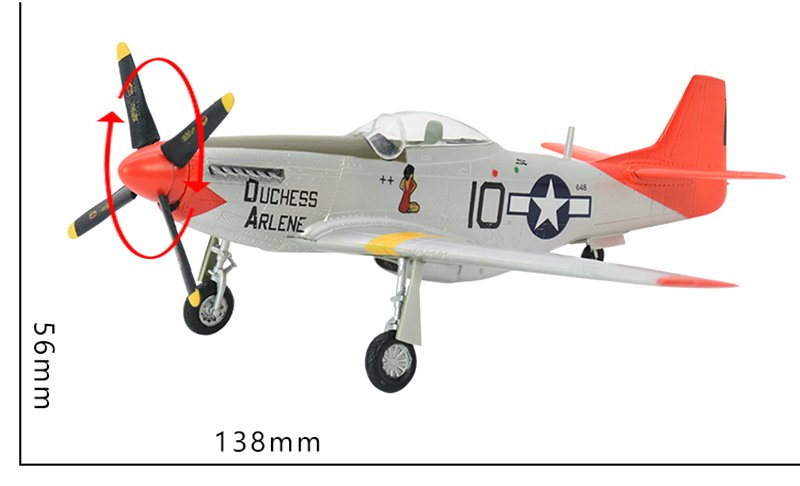